Signs and Symptoms that could mean you have Vitamin D Deficiency 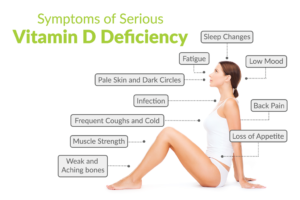 Signs and Symptoms that could mean you have Vitamin D Deficiency

Before going deep into the topic, let’s understand what a vitamin D is. It is a fat-soluble vitamin that will be synthesized when your skin is exposed to sunlight. It can also be found in some foods, but only in small quantities. The greatest use of this vitamin is lying in the fact that it supports calcium metabolism by helping your body to absorb calcium contents from the foods and supplements you intake. Thus, vitamin D is supporting the maintenance of healthy bones.

But remember, this is not the only function of vitamin D. It also has the following roles to play:

Thus, vitamin D is one of the essential things that your body needs. When it comes to measuring the status of vitamin D in your body, you cannot rely only on your vitamin D intake because there are several other factors to consider. So, the best way to know whether you are deficient in vitamin D is to look for the signs and symptoms.

Read the following article to know the major signs and symptoms that could indicate you have a vitamin D deficiency:

Being a victim of frequent sickness or infections:

As mentioned above, one of the roles of vitamin D is to keep your body’s immune system strong, so you are able to fight against the bacteria and viruses that cause infections. Biochemically, the vitamin D molecules will directly interact with the cells that are accountable for fighting illnesses. So, if you are a victim of frequent infections, especially of cold and flu, you might be having a vitamin D deficiency.

Several research studies have found out there is a relationship between a vitamin D deficiency and infections like:

Dealing with fatigue and tiredness:

Yes, this is not the sign that you could get only when you are deficient in vitamin D, but its deficiency is one of the reasons that make a person feel fatigued and tiredness. Unluckily, vitamin D deficiency is frequently overlooked as a possible cause. Don’t do this mistake again! If you are facing the tiredness issue very often, you might talk to your doctor to determine whether you are vitamin D deficient. In fact, an observational study has proved that there is a link between vitamin D and fatigue in young females. In another study, it has been found that there is a strong link between low vitamin D and fatigue in female nurses.

Experiencing pain in the bone and the back:

As mentioned earlier, one of the greatest functions of vitamin D is to maintain our bone’s health. This, it does through several mechanisms and the important one among them is to enhance the absorption of calcium. Thus, when you are devoid of vitamin D, you may experience pain in the bone and lower back. Several observational studies have shown the link between vitamin D deficiency and persistent lower back pain. The researchers have found out that those people with a vitamin D deficiency are more likely to get a pain in their back, which can be severe that it could limit their day to day activities.

Yes, depression can also indicate a vitamin D deficiency. In several studies, researchers have correlated this deficiency to depression, especially in older adults, although no controlled trials have proved this yet. Only review studies and observational studies have found a possible link between vitamin deficiency and depression. But, researchers who evaluated these studies have also found that vitamin D dosages are very low in controlled studies.

The results of a study called “test-tube study” have shown that the vitamin elevates the synthesis of compounds that are important for forming the new skin in a wound-healing process. Thus, if you could find that your wounds after a surgery or an injury take too long to heal, you might be having a vitamin D deficiency. Also, it’s been suggested that this vitamin’s role in limiting inflammation and fighting infection is critical for proper wound healing.

Having a low bone mineral density:

Although hair loss is often thought to be caused by stress, it can also be the result of some nutrient deficiency. Hair loss, especially in women, has been correlated with low vitamin D levels, though there is only a little research available so far. In the condition called “alopecia areata”, the patients will experience severe hair loss that is linked to rickets – caused by vitamin D deficiency. So, we can say that low vitamin D is associated with alopecia areata and could be a risk factor for it.

Other Signs and Symptoms:

How can you correct a vitamin D deficiency?