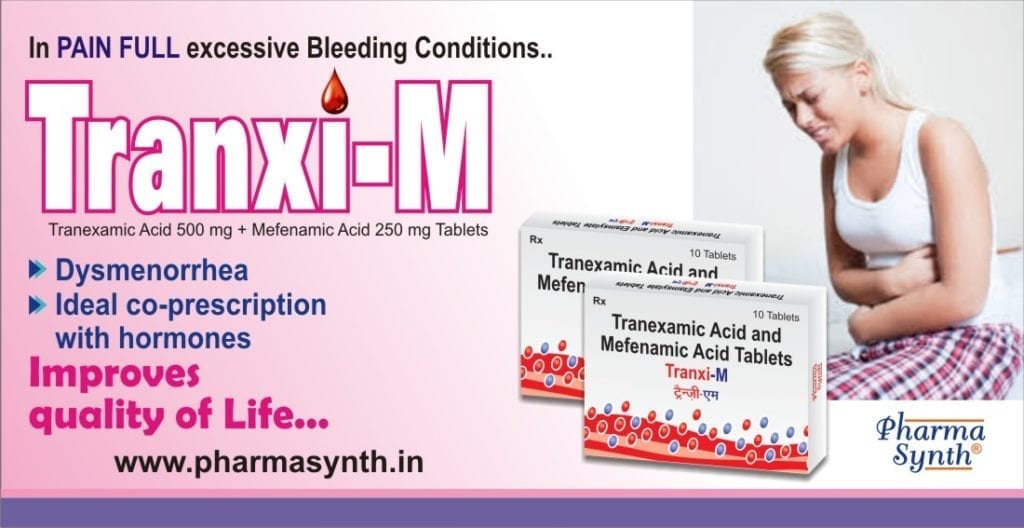 Description:
Tranxi-M tablets have a comprehensive formula that act towards providing relief in women who go through painful and abnormally heavy menstrual bleeding known as menorrhagia. Tranexamic acid present in the tranxi-M is clinically approved antifibrinolytic drug that arrests heavy menstrual bleeding by blocking fibrin degradation in uterus during luteal phase of menstrual cycle. It is one of the drugs that are considered to be the first line of treatment for idiopathic heavy menstrual bleeding. Mefenemic acid is a non-steroidal anti inflammatory drug that provides relief from the pain associated with menorrhagia. Mefenemic acid works synergistically with tranexamic acid in reducing pain and blood loss associated with secondary dysmenorrheal conditions due to uterine fibroids, adenomyosis, or endometriosis.

Pharmacological action:
Tranexamic acid prevents the breakdown of fibrin, a protein together with platelets which forms a haemostatic plug or clot. Tranexamic acid is a synthetic analog of amino acid lysine; thus it reversibly binds and blocks lysine binding sites present on plasminogen, an enzyme that gets activated to plasmin by binding to lysine residues present on fibrin. Plasmin eventually breaks down fibrin that leads to bleeding and therefore tranexamic acid works by preventing the formation of plasmin and also by lowering the levels of tissue plasminogen activator (tPA), an enzyme that catalyzes plasmin lysis of fibrin and whose elevated concentrations are observed in endometrial, uterine, and menstrual blood of women with heavy menstrual bleeding.
Mefenamic acid is a member of the fenamate group of nonsteroidal anti-inflammatory drugs (NSAIDs). It exhibits anti-inflammatory, analgesic, and antipyretic activities. Its anti-inflammatory activity is by inhibiting the enzyme, cyclooxygenase (COX), an early component of the arachidonic acid cascade that results in the formation of prostaglandins, thromboxanes and prostacyclin.  Prostaglandins are produced at sites of injury or damage causing pain and inflammation and also during mensturation by the endometrial cells lining the uterus. Mefenamic acid by blocking the effect of COX enzymes not only stops formation of new prostaglandins but also controls the preformed prostaglandins in the endometrial cells thereby relieving from the pain associated with the menstrual bleeding and spasmodic dysmenorrheal.
Pharmacokinetics:
After oral administration of tranexamic acid peak plasma concentration reaches after 2-3 hours and is not affected by food. At therapeutic concentrations it is much less bound to plasma proteins but has high affinity to plasminogen. It has an elimination half life of 2hours and is eliminated mainly via the kidneys. Patients with renal insufficiency are to be administered tranexamic acid with caution.
After oral administration mefenamic acid is rapidly absorbed, reaching peak values within 2 to 4 hours and the elimination half-life approximates 2 hours. Volume of distribution (Vd) is approximately 1.06 L/kg.  Mefenamic acid, its metabolites and conjugates are primarily excreted by the kidneys as glucuronides of mefenamic acid (6%), 3-hydroxymefenamic acid (25%) and 3- carboxymefenamic acid (21%).  The unconjugated form of 3-carboxymefenamic acid is excreted via fecal route.

Indications:
Tranxi-M tablets are indicated for the following:

Note: Prior to prescribing Tranxi-M for the above conditions, patient should be tested for any endometrial pathology that can be associated with heavy menstrual bleeding.

Dosage and Administration:
As recommended by the Physician depending on the intended use.
When prescribed for Menorrhagia and Dysmenorrhea treatment with Tranxi-M should not be initiated until the menstrual bleeding has started.

Side effects:
Side effects reported with Tranx-M are typically those reported with use of NSAIDs:
Sedation, drowsiness, blurred or double vision, nausea, heartburn, diarrhea, headache, dizziness, fluid and salt retention, edema feet, high blood pressure, flatulence, constipation, abdominal pain and loss of appetite.
Headache and backache are the common side effects associated with tranexamic acid present in Tranxi-M.
Note:
Discontinue use if any hypersensitivity reactions such as rash or redness occur.
Patients should immediately report signs or symptoms of unexplained weight gain or edema to their physicians.