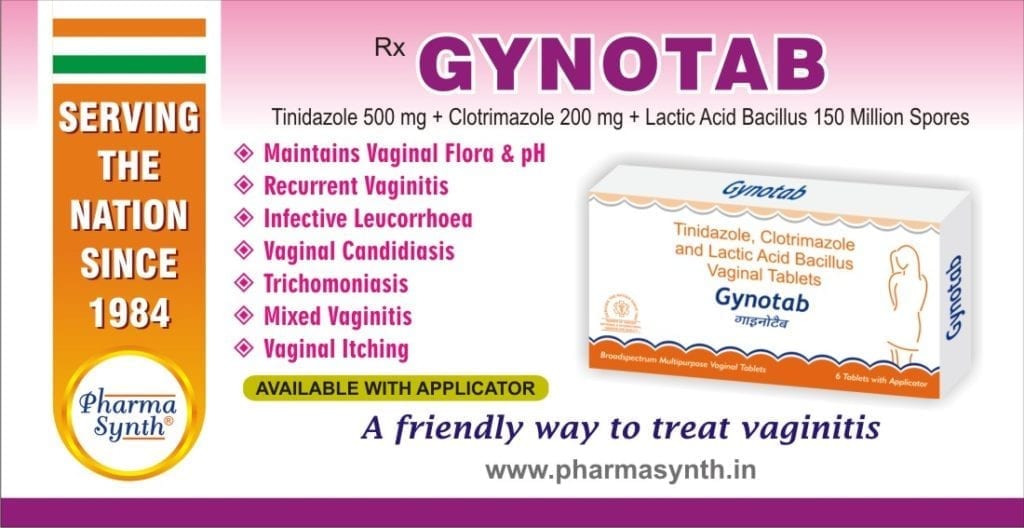 Dosage form:
Vaginal Tablets
ATC classification:
Antiinfective agents
Description:
Gynotab is a comprehensively designed formula to treat microbial infections of vagina and to promote the growth of normal vaginal flora. Tinidazole, the anti protozoal and anti bacterial component of Gynotab treats infections by microbes in Vaginal areas. Clotrimazole, the antimycotic agent of Gynotab not only treats fungal infections of vagina but also acts as precautionary measure against development of vaginal candidiasis due to the use of tinidazole. Lactic acid bacillus spores, the probiotic component re-establishes normal lactobacillus predominant flora in the vagina and also prevents recurrent infections.
Pharmacological action:
Pharmacodynamics of tinidazole:
Tinidazole, the antiprotozoal nitro-imdiazole derivative is a prodrug. It is activated by infection causing microorganism Trichomonas vaginalis. Free nitro radical is generated from tinidazole when Trichomonas induces a reduction reaction. This toxic free radical irreversibly binds to DNA of trichomonas, causing DNA damage and leading to cell death.
Mechanism of action of Tinidazole in Entamoeba histolytica and Giardia lamblia infections is unknown and thought to be similar to its action against Trichomonas vaginalis.
Tinidazole demonstrates activity against the following organisms:
Bacteroides:
Gardnerella vaginalis
Prevotella species
Anaerobic bacteria have greater susceptibility to tinidazole
Protozoal parasites
Trichomonas vaginalis
Giardia duodenalis (G. lamblia)
Entamoeba histolytica
Tinidazole is active against some protozoa resistant to metronidazole
It does not have activity against most strains of vaginal lactobacilli.
Pharmacokinetics of tinidazole:
Elimination half life of tinidazole determined after oral administration, was found to be 13.2 (+/-1.4) hrs. It distributes in all tissues and body fluids with a volume of distribution of 50L. It crosses the blood-brain barrier, placental barrier and is distributed into breast milk.
Elimination: 20-25% of unchanged drug is excreted in urine and 12% is excreted via feces.
However, compared with oral dosing, only about 10% of the intravaginal tinidazole is absorbed on an average. Hence, tinidazole administered via vaginal route exerts local action with no systemic side effects. The treatment of anaerobic vaginosis with vaginal tinidazole was found to be effective and particularly useful if an intra-uterine contraceptive device was in concurrent use.
Pharmacodynamics of Clotrimazole:
Clotrimazole, the broad spectrum antifungal acts by inhibiting ergosterol synthesis. Cell membranes of fungi and protozoa are made of ergosterol, inhibition of its synthesis leads to impairment of cytosplasmic membrane. Clotrimazole is known to have activity against dermatophytes, moulds and yeasts. In addition to its antifungal action, it also acts on gram-positive bacteria (Streptococci /Staphylococci / Gardnerella vaginalis), and gram-negative bacteria. Depending on the concentration of clotrimazole at the site of action, it exhibits fungi static and fungicidal activity.
Pharmacokinetics of Clotrimazole:
Pharmacokinetic studies after vaginal application of clotrimazole have shown that only a small amount of drug (3-10%) is absorbed. Clotrimazole undergoes rapid hepatic metabolism into inactive metabolites and the resulting peak plasma concentrations of Clotrimazole-500mg given via vaginal route were found to be less than 10ng/ml. From these findings it is inferred that Clotrimazole given via vaginal route is unlikely to show systemic side effects.
Pharmacodynamics of Lactic acid Bacillus:
Lactic acid bacillus spores incorporated into the vagina adhere to the vaginal cells and restore indigenous lactobacilli. Depletion of natural vaginal flora by the antimicrobials, often leads to recurrent infections. Use of probiotics replenishes the vaginal flora, reducing the risk of re-infections and bacterial vaginosis. Lactic acid produced by Lactic acid bacillus spores not only restores the normal vaginal pH to 3.8-4.5 but also exhibits anti-microbial activity. Probiotics are known to produce anti-infective defenses like biosurfactants that prevent the adhesion of pathogens to the vagina by altering the surface tension. By this mechanism they also prevent spreading of pathogens to other areas of vagina and urinary bladder.
Indications:

Contraindications:
Gynotab is contraindicated in patients with a known hypersensitivity to any of the ingredients present in the Gynotab
Tinidazole/ Tinidazole containing preparations should be used with caution in patients with evidence or history of blood dyscrasia.
Side effects:
Gynotab is well tolerated with no prominent side effects
If any of the below mentioned adverse reactions are observed then discontinue use and consult your Physician

Pregnancy:
Pregnancy category: C
Tinidazole is contraindicated during the first trimester of pregnancy. During the second and third trimester of pregnancy, tinidazole is only recommended for use when there are no alternatives and benefit outweighs risk.
Lactation:
Tinidazole and clotrimazole are excreted into human milk. The effects in the nursing infant are unknown. Hence, breast-feeding is not recommended during therapy and for 72 hours following the last dose.

References:
Comparative Pharmacokinetics of Metronidazole and Tinidazole as Influenced by Administration Route
Vaginal Microbiota and the Use of Probiotics