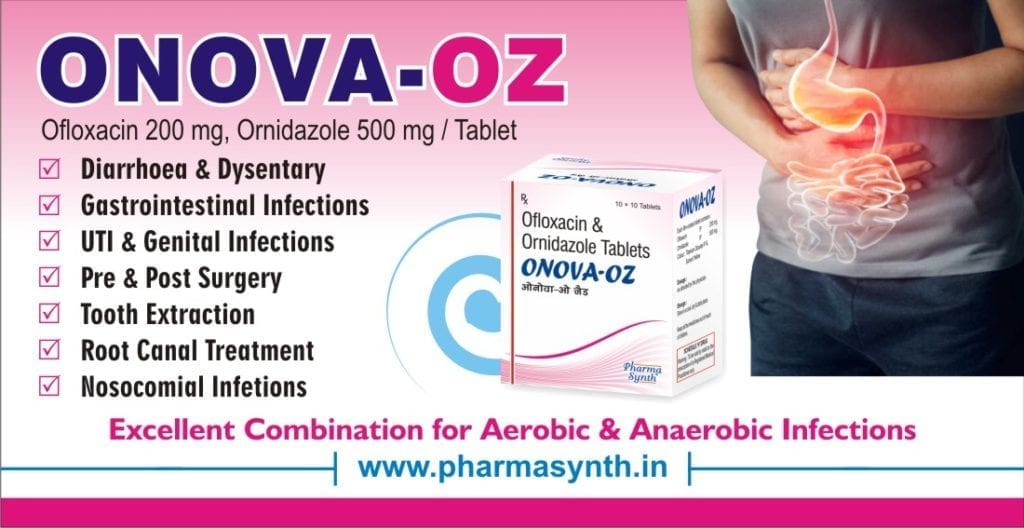 Description:
ONOVA-OZ tablet facilitates concomitant administration of an antibacterial and an anti protozoal drug. Ofloxacin is the quinolone antibacterial component of Onova-oz whereas Ornidazole has both antiprotozoal and antibacterial activity. It is designed for treating diarrhea and peritonitis caused in adults due to bacteria, amoeba and/or mixed origin.

Pharmacological action:
Ofloxacin: It is active after oral administration. It exhibits antibacterial activity by inhibiting DNA topo-isomerases mainly DNA gyrase, the enzyme involved in DNA replication of bacteria.
Ofloxacin has antibacterial activity against most strains of the following microorganisms both in vitro and in clinical infections:
Aerobic Gram-positive Microorganisms
Staphylococcus aureus(methicillin-susceptible strains)
Streptococcus pneumoniae(penicillin-susceptible strains)
Streptococcus pyogenes
Aerobic Gram-negative Microorganisms
Citrobacter (diversus) koseri
Enterobacter aerogenes
Escherichia coli
Haemophilus influenzae
Klebsiella pneumoniae
Neisseria gonorrhoeae
Proteus mirabilis
Pseudomonas aeruginosa
Pharmacokinetics of Ofloxacin:
It is completely absorbed after oral administration. Maximal drug concentration in blood reaches within 1-3hrs after dosing and elimination half life is 4-6hrs. It is primarily excreted unchanged in urine.
Following oral administration of recommended therapeutic doses, ofloxacin has been detected in skin, sputum, lung tissue, blister fluid, ovary, cervix, prostatic fluid and prostatic tissue. The mean concentration of ofloxacin in each of these various tissues and body fluids after one or more doses was 0.8 to 1.5 times the concurrent plasma level.
Ornidazole: It passively enters the bacterial cell wall where its nitro group is reduced to amine group by the redox system of bacteria. The intermediate intracellular metabolites thus formed during the redox reactions are believed to be causing bacterial cell death. The same mechanism of action is postulated in protozoa.
Ornidazole is effective against the following protozoa:
Trichomonas vaginalis, Entamoeba histolytica and Giardia lamblia (Giardia intestinalis),
And also against certain anaerobic bacteria such as  Bacteroides and Clostridium spp., Fusobacterium spp., and anaerobic cocci.
Pharmacokinetics of Ornidazole:
Following oral administration, ornidazole is rapidly absorbed and peak plasma concentrations of 30mcg/ml are reached within 2 hours of single dose of 1.5gms. Food affects the rate of absorption of Ornidazole. It has less affinity to plasma proteins and readily distributes to body tissues, fluids and cerebrospinal fluid. Antibacterial concentrations are achieved in intestinal tissues, vaginal secretions and amniotic fluids. More than 90% of Ornidazole is metabolized in liver and the metabolites have anti bacterial activity against anaerobic bacteria. Elimination half life is 12-14hours. It is excreted in urine as conjugates and metabolites. However biliary excretion is important in elimination of Ornidazole and its metabolites.

Indications:
ONOVA-OZ is indicated for:

Dosage
One tablet of ONOVA- OZ is recommended as twice-daily therapy.

Contraindications:
ONOVA- OZ is contraindicated in persons with a history of hypersensitivity associated with the use of ofloxacin, ornidazole or any member of the quinolone or nitroimidazole group of antimicrobial agents.

Note: Tendinitis and tendon rupture have been reported in patients taking fluoroquinolones who do not have the above mentioned risk factors and therefore Ofloxacin should be discontinued if the patient experiences pain, swelling, inflammation or rupture of a tendon. Patients are advised to rest at the first sign of tendinitis or tendon rupture, and to contact their physician regarding changing to a non-quinolone antimicrobial drug

Drug Interactions:
The following drugs are known for having drug interactions with Ofloxacin:

The following drugs are known for having drug interactions with Ornidazole:

Pregnancy:
No adequate and well-controlled studies in pregnant women to determine safety of ONOVA-OZ
Lactation:
Because of the potential for serious adverse reactions from ofloxacin in nursing infants, a decision should be made whether to discontinue nursing or to discontinue the drug, taking into account the importance of the drug to the mother.