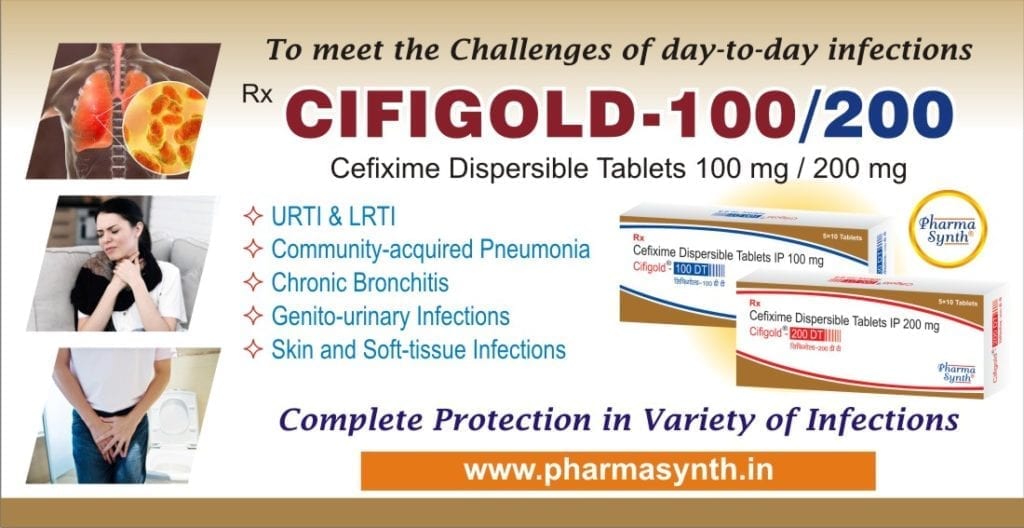 A Golden combination of safe antibiotic with proteolytic enzyme & probiotic.
Composition:
Each uncoated Cifigold 200 dispersible tablet contains:
Cefixime IP equivalent to Anhydrous Cefixime 200 mg
Dosage form:
Dispersible tablets
ATC classification:
Antibacterials for systemic use
Description:
Cefixime is an orally administered, broad spectrum, semi-synthetic antibiotic of the third generation cephalosporins. It exerts bactericidal action on beta lactamase producing microorganisms that are resistant to penicillins and cephalosporins. It is more active against gram-negative bacteria and less active against gram-positive bacteria compared to second-generation cephalosporins.
Pharmacological action:
Mechanism of Action:
Cefixime, the beta-lactam antibiotic inhibits bacterial cell wall synthesis by disrupting peptidoglycan synthesis, resulting in a reduction in bacterial cell wall stability and subsequent bacterial cell lysis. It is highly stable in the presence of most of the beta-lactamase enzymes.
Cefixime is active against the following bacteria, both in vitro and in clinical infections:
Gram-positive Bacteria:

It is also clinically effective against infections caused by commonly occurring pathogens, including Branhamella catarrhalis (beta-lactamase-positive and -negative) and Enterobacter species.
Cefixime has little activity against Staphylococcus aureus and is inactive against Pseudomonas aeruginosa.
Pharmacokinetics:
Absorption:
Following oral administration of Cefixime to subjects, around 40%-50% of the administered dose was absorbed systemically. Absolute bioavailability was not dependent on food; therefore Cefixime can be given without regard to meals.
A single 200 mg tablet of Cefixime produced an average peak serum concentration of approximately 2 mcg/mL (range: 1 to 4 mcg/mL) while oral suspension of 200 mg doses produced average peak concentrations of 3 mcg/mL. Increased absorption of oral suspension should be taken into consideration if it is to be substituted for the tablet.
Note: In the treatment of otitis media, tablets should not be substituted for oral suspension due to lack of bioequivalence.
The serum half-life of Cefixime in healthy subjects was found to be independent of dosage form and averages 3 to 4 hours, but may also range up to 9 hours in some normal volunteers. Peak serum concentrations occur between 2 and 6 hours following oral administration of a single 200 mg tablet, a single 400 mg tablet, or 400 mg of cefixime suspension.
Protein binding:
Cefixime bounds exclusively to albumin fraction. Serum protein binding of Cefixime is concentration independent, with a bound fraction of approximately 65%.
Excretion:
There is no evidence of metabolism of Cefixime in vivo. Glomerular filtration is considered the predominant mechanism by which Cefixime is eliminated from the body. Approximately 50% of the absorbed dose is excreted unchanged in the urine in 24 hours.
Indications:
CIFIGOLD DT is indicated in the treatment of adults and CIFIGOLD dry syrup is indicated for paediatric patients, 6 months of age or older, with the following infections when caused by susceptible isolates of the designated bacteria:
Uncomplicated Urinary Tract Infections (e.g. cystitis, cystourethritis, uncomplicated pyelonephritis) caused by Escherichia coli and Proteus mirabilis.
Upper Respiratory Tract Infections (URTI) where the causative organism is known or suspected to be resistant to other commonly used antibiotics, or where treatment failure may carry significant risk.
Otitis Media caused by Haemophilus influenzae, Moraxella catarrhalis, and Streptococcus pyogenes.
Pharyngitis and Tonsillitis caused by Streptococcus pyogenes.
Note: Penicillin is the usual drug of choice in the treatment of Streptococcus pyogenes infections. Cefixime is generally effective in the eradication of Streptococcus pyogenes from the nasopharynx.
Acute Exacerbations of Chronic Bronchitis caused by Streptococcus pneumoniae and Haemophilus influenzae.
Uncomplicated Gonorrhoea (cervical/urethral) caused by Neisseria gonorrhoeae (penicillinase- and non-penicillinase-producing isolates).
Dosage:
Adults:

Pediatric patients:
CIFIGOLD dry syrup is indicated for pediatric patients, 6 months of age or older.
The usual recommended dose is 8 mg/kg/day of the reconstituted suspension. This may be administered as a single daily dose or may be given in two divided doses, as 4 mg/kg every 12 hours.
Children weighing more than 45 kg or older than 12 years should be treated with the recommended adult dose, 200 to 400 mg daily, depending on the severity of infection.
Geriatric patients:
Elderly patients having normal renal function may be given the same dose as recommended for adults.
Patients with Renal Dysfunction:
In patients with creatinine clearances of 60 mL/min or greater: Normal dose and schedule can be followed.
In patients with creatinine clearance between 21 and 60 mL/min or patients who are on renal haemodialysis: 75% of the standard dosage at the standard dosing interval (i.e. 300 mg daily)
In patients with creatinine clearance less than 20 ml/min:  dose of 200 mg once daily should not be exceeded.
Patients who are maintained on haemodialysis or chronic ambulatory peritoneal dialysis should follow the same recommendation as that for patients with creatinine clearances of less than 20 ml/min.
Directions for use:
For CIFIGOLD DT: Disperse the tablet in teaspoonful of boiled and cooled water immediately before administration.
For CIFIGOLD dry syrup:
Direction for Preparing the Suspension
At the time of dispensing, the dry powder should be reconstituted to form an oral suspension. First, shake the bottle to loosen the powder. Twist and open the vial of sterile water given with the pack. Slowly add half quantity of the sterile water into the bottle. Recap the bottle, and shake it vigorously. Adjust the suspension volume up to the red arrow mark by adding more sterile water, if necessary, and shake again. Store the reconstituted suspension in cool place.
After reconstitution, the contents should be consumed within 7 days. Keep tightly closed. Shake well before each use. Discard the unused portion after 7 days.
Contraindications:
If CIFIGOLD is to be administered to penicillin sensitive patients, caution should be exercised because cross hypersensitivity among beta-lactam antibiotics.
If CIFIGOLD is to be administered to penicillin sensitive patients, caution should be exercised because cross hypersensitivity among beta-lactam antibiotics.
Side effects:
Cefixime is generally well tolerated. The majority of adverse reactions observed in clinical trials were mild and transient in nature
Frequently reported adverse reactions include diarrhea, abdominal pain, nausea, dyspepsia and flatulence. Skin rashes, urticaria, drug fever, headaches and dizziness have also been reported.
Warnings and Precautions:
General:

Drug Interactions:
The following drugs are known for having drug interactions with Cefexime:
Carabamazepine
Warfarin and other anticoagulants
Pregnancy:
Pregnancy category: B
Cefixime should be used during pregnancy only if clearly needed
Lactation:
It is not known whether Cefixime is excreted in human milk. Consideration should be given to discontinuing nursing temporarily during treatment with this drug.
Pediatric Use:
Safety and efficacy in infants aged less than six months have not been established.
Information to be shared with Patients:
Antibacterial drugs including CIFIGOLD should only be used to treat bacterial infections. They do not treat viral infections (e.g., the common cold). When CIFIGOLD is prescribed to treat a bacterial infection, patients should be told that although it is common to feel better early in the course of therapy, the medication should be taken exactly as directed. Skipping doses or not completing the full course of therapy may
(1) Decrease the effectiveness of the immediate treatment and
(2) Increase the likelihood that bacteria will develop resistance and will not be treatable by CIFIGOLD or other antibacterial drugs in the future.
Diarrhea is a common problem caused by antibiotics which usually ends when the antibiotic is discontinued. Sometimes after starting treatment with antibiotics, patients can develop watery and bloody stools (with or without stomach cramps and fever) even as late as two or more months after having taken the last dose of the antibiotic. If this occurs, patients should contact their physician immediately.
References:
fda.gov/
pubchem.ncbi.nlm.nih.gov/compound/cefixime