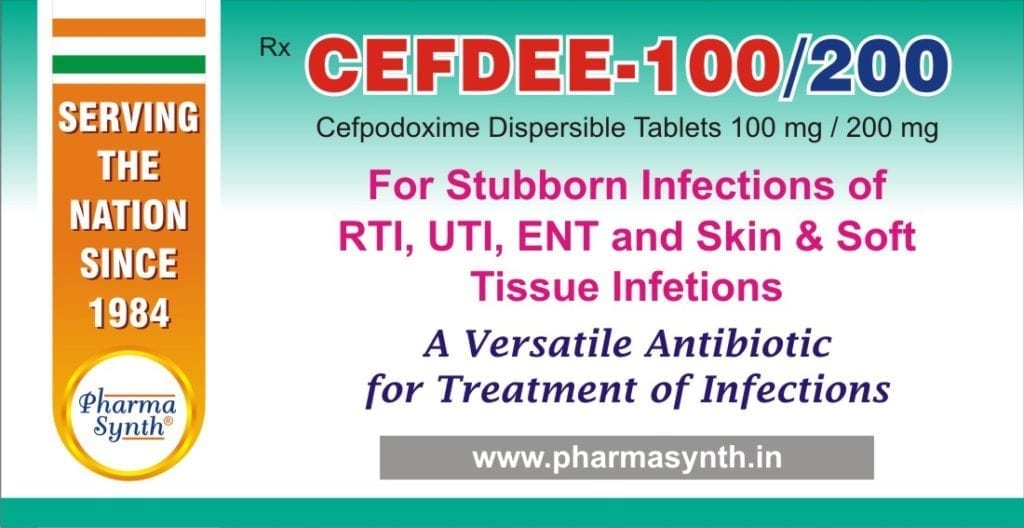 Composition:
Each CEFDEE- 200 dispersible uncoated tablet contains:
Cefpodoxime Proxetil IP equivalent to Cefpodoxime 200 mg in a flavored base.
Dosage form:
Dispersible tablets
ATC classification:
Antibacterials for systemic use
Description:
CEFDEE is an orally administered, extended-spectrum, semi-synthetic antibiotic of the third generation cephalosporins. It exerts bactericidal action on beta lactamase producing microorganisms that are resistant to penicillins and cephalosporins. The drug has a broad spectrum of antibacterial activity encompassing both Gram-negative and Gram-positive bacteria.
Pharmacological action:
Mechanism of Action:
CEFDEE acts by inhibition of bacterial cell wall synthesis by binding to penicillin-binding proteins (PBPs) located in the bacterial cytoplasmic membrane. It is stable in the presence of some beta-lactamases, both penicillinases and cephalosporinases, of Gram-positive and Gram-negative bacteria. It is inactivated by certain extended-spectrum beta-lactamases.
Cefpodoxime is active against the following bacteria, both in vitro and in clinical infections
Gram-positive bacteria:

Geriatric patients:
CEFDEE is safe to be used in Geriatric patients. Dose adjustment in elderly patients with normal renal function is not necessary.
Patients with Renal Dysfunction
In patients with moderate (30 to 49 mL/min creatinine clearance) or severe renal impairment (5 to 29 mL/min creatinine clearance), the half-life increased to 5.9 and 9.8 hours respectively.
Therefore for patients with severe renal impairment the dosing intervals should be increased Q 24hours. In patients maintained on hemodialysis, dose frequency should be 3times/week after hemodialysis.
Patients with Cirrhosis:
Directions for use:
Disperse the tablet in teaspoonful of boiled and cooled water immediately before administration.
Contraindications:
CEFDEE is contraindicated in patients with a known allergy to cefpodoxime or to the cephalosporin group of antibiotics.
If CEFDEE is to be administered to penicillin sensitive patients, caution should be exercised because cross hypersensitivity among beta-lactam antibiotics.
Side effects:
Common side effects seen with CEFDEE: Diarrhea and nausea/vomiting
Uncommon side effects: dizziness, headache, syncope, rash, abdominal pain.
Inform your physician if you experience any side effects.
Warnings and Precautions:
General:

Drug Interactions:
The following drugs are known for having drug interactions with cefpodoxime proxetil:

Pregnancy:
Pregnancy category: B
CEFDEE should be used during pregnancy only if clearly needed.
Lactation:
Cefpodoxime is excreted in human milk. There is risk for serious reactions in nursing infants, so a decision should be made whether to discontinue nursing or to discontinue the drug, taking into account the importance of the drug to the mother.
Pediatric Use:
Safety and efficacy in infants less than 2 months of age have not been established
Information to be shared with Patients:
Antibacterial drugs including CEFDEE should only be used to treat bacterial infections. They do not treat viral infections (e.g., the common cold). When CEFDEE is prescribed to treat a bacterial infection, patients should be told that although it is common to feel better early in the course of therapy, the medication should be taken exactly as directed. Skipping doses or not completing the full course of therapy may
(1) Decrease the effectiveness of the immediate treatment and
(2) Increase the likelihood that bacteria will develop resistance and will not be treatable by CEFDEE or other antibacterial drugs in the future.
Diarrhea is a common problem caused by antibiotics which usually ends when the antibiotic is discontinued. Sometimes after starting treatment with antibiotics, patients can develop watery and bloody stools (with or without stomach cramps and fever) even as late as two or more months after having taken the last dose of the antibiotic. If this occurs, patients should contact their physician immediately.
References:
fda.gov
pubchem.ncbi.nlm.nih.gov/compound/cefpodoxime_proxetil
ncbi.nlm.nih.gov/pubmed/1726203
ncbi.nlm.nih.gov/pubmed/2292528
ncbi.nlm.nih.gov/pubmed/2292530
ncbi.nlm.nih.gov/pubmed/2393268